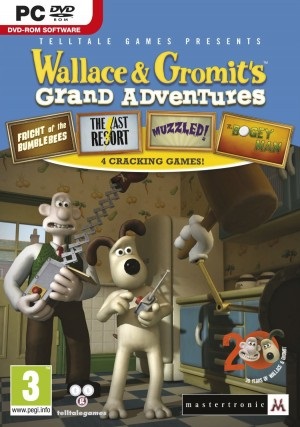 Wallace & Gromit are the protagonists of Nick Park’s animation series of the same name. He produced them with his company Aardman Animations. The figures were modeled from plasitlin on rotating frames. The animations were made using the stop-motion technique known as claymation.

Wallace and Gromit – The Games

The games of the Telltale Games became famous. The developer studio divided the games into episodes. They are based on the story of Nick Park.

Telltale Games released the series under the title Wallace & Gromit Grand Adventures. In total, it consists of 4 episodes.

The Telltale Games do not include:

The distribution rights to the games expired in January 2014 and the developer studio’s license was withdrawn. Telltale Games did not continue the Wallace and Gromit series. It disappeared from the trade. Therefore, the games are available on DVD and not on Steam, as was the case initially.

In terms of gameplay, Wallace & Gromit games are 3D Point & Click Adventure. The figures were created from polygons and built up as 3-dimensional figures. The development studio developed the “Telltale Tool” engine itself. You use mouse and keyboard to collect objects, interact with the game environment and talk to other NPCs. The further the action progresses, the more locations you unlock.

The camera work: The camera work shows the game from a variable perspective. If you leave the field of vision, it switches to a different perspective. The dialogs offer a selection menu with which you can answer questions. In between there are mini-games in which you demonstrate skill and thinking skills. The cutscenes take place with the game graphics. The order of the game titles changed for the German publication. It appeared on JoWood and in France through Focus Home Interactive.

Wallace & Gromit: Fright of The Bumblebee

Wallace & Gromit: The bumblebee or Fright of the Bumble Bees is an adventure game for the PC. The Wallace & Gromit part was released on October 26, 2010.

Wallace is a clumsy inventor and Gromit his dog who helps him. The dog plays the main role in the game.

Wallace wants to get into the honey business. His latest machine automatically extracts honey from a beehive. That’s why Mr. Paneer orders 250 liters of honey from him. It is unfavorable that he cannot produce enough. He grows giant flowers to boost honey production. In this attempt, he accidentally creates a horde of giant bees. The aim of the game is to chase away the bees. You take turns Wallace and Gromit. You control the heroes by keyboard. You manipulate objects with mouse clicks. The puzzles are consistently logical and simple. The dialogues were set very well in English. The German subtitle leaves something to be desired. You don’t sit in the game for more than 4 hours.

Wallace and Gromit: The Last Resort

With The Last Resort, Wallace and Gromit experience the second part as a game. This part also comes from Telltale Games. It was released on July 27, 2010.

Wallace and Gromit are out of luck. The rainy weather in England is to blame for the fact that their vacation is canceled, because the basement of the house is full of water. Wallace tries to save the whole thing. His new goal: to open a beach club in the basement. It only makes everything worse. The water masses in the basement are under high current, the main switch is at the other end of the room and Wallace is in the middle and is nowhere to be found. So his dog Gromit has to save the poor. In addition, he gets visitors because of his project. Mrs. Flitt, her Scottish admirer McBuiscuit and a British major besiege the basement. Of course everyone wants something different, and Wallace doesn’t even know which task to start with.

You control Wallace and Gromit The Last Resort with the arrow keys. You examine and operate the objects with the mouse. With a click, Wallace or Gromit move independently to the places where they should go. They automatically run around obstacles. The game can be better controlled with the gamepad. It becomes problematic when changing the scene. The game specifies which things you can take with you or just look at. The game brings up to 4 hours of fun.

Graphically, the game is nicely designed. Details are easy to see, such as fingerprints. The animations were successful. Telltale Games implemented it excellently. Facial expressions and animations can be seen. The appropriate background music for the films was used for the music. Sound effects are used somewhat sparingly.

Wallace & Gromit The Last Resort is an entertaining 2nd episode of the two. The story is funny, the dialogues entertain well and the game was staged excellently. It is definitely worth a look for fans of the game and players of Episode 1. Here it is the same as for the first part: it is only available as a DVD and no longer online, as Telltale Games’ license was withdrawn.

Muzzled! is the third chapter in the adventure series by Wallace and Gromit at Telltale Games. The two get into trouble with Monty Muzzle. The third part appeared on August 31, 2010.

Muzzled! is the 3rd part of the Telltale series by Wallace and Gromit. Wallace is preparing for this year’s fair. Unfortunately, the dog shelter was destroyed in a storm. Lots of dogs appear here and the question arises where they come from and what they have in mind! Mr. Muzzle, who organized the fair, collects money for the “poor” dogs. He wants to build a new dog shelter. Your goal in the game is to expose the charismatic gentlemen. The animals destroyed Wallace’s ice machine. Gromit helps his owner to reassemble his ice cream machine, which creates ice cream in every taste. Gromit solves various puzzles to support his master.

The puzzles in the game are easy. Games and a dialogue puzzle loosen up the story. In addition to the traditional puzzles, there are dialog puzzles to be solved. As in the previous part, the language in English and the German subtitle are not particularly understandable. Accordingly, there is all sorts of English humor.

The game is fun, but it borders on boredom. The story is weird, the characters are lovable and the scenario fits. The game has a few weaknesses. The puzzles are too simple and the goal is to convince Monty Muzzle. This is what gives the game some momentum that otherwise disappears in boredom. The gentleman manages to wrap everyone in the village around his finger and play a double game behind his back. On the outside, he mimics the benefactor. In this sense, the dog plot is a good game, but nothing more. Like the other two parts, the game is only available on DVD.

Wallace and Gromit: The Bogey Man is the last part of the Telltale Games series. Wallace makes every effort to prevent his wedding. The fourth part came out on October 5, 2010.

Poor Wallace is surprisingly engaged and about to get married. Due to a misunderstanding, he is the future of his neighbor Miss Flitter. In this game you help him to prevent his wedding. It helps that the aunt only agrees to the engagement if Wallace is not a member of the golf club. The club is close to being closed and Wallace is committed to becoming a member.

The last part is also in English. The humor is not neglected here. Many sections from the predecessor were used again. There are fewer new locations. You control the protagonist with mouse and keyboard. There are also some graphics errors that reduce the gaming experience.

The finale does not manage to top its predecessors. There are one or two more difficult puzzles in this part, but Wallace & Gromit are not convincing. Nice, well-intentioned, but weak.

Project Zoo developed the Studio Frontiers Development. The game was released for PC and Xbox as well as for the PS2.

Wallace & Gromit are planning Archie’s birthday. The polar bear has a birthday on October 1st. However: the zoo is closed. Wallace & Gromit enter the zoo with a giant wooden penguin. The nasty penguin Feathers McGraw captured the progeny of the zoo animals. Archie is a polar bear that Wallace adopted. This is well guarded by the villain. Wallace and Gromit have to free him. The penguin wants to implement the plan to turn the zoo into a diamond mine. It forces the adult animals to work in the mine.

Unlike the other Wallace & Gromit games, the game is a jump and run game. There are bonus areas, puzzles and mini-games. You attack the final bosses with a variety of weapons.

In Project Zoo you control Gromit, whom Wallace accompanies. This assembles a variety of things or repairs them. You collect screws and nuts for him and everything else he needs. Wallace builds weapons from a variety of pieces of equipment.

The Jump ‘n’ Run by Wallace and Gromit offers lots of fun and entertainment. Unfortunately there are some frustrating places when it comes to jumping. Still, this game is worth it and fans of the two should definitely access it.