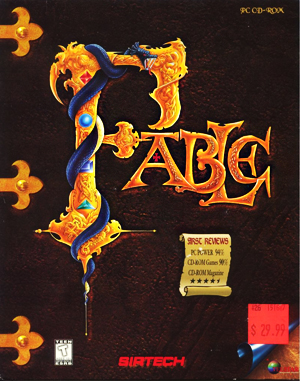 Fable plays in an extremely dangerous and deadly fantasy world. You are playing the young Quickthorpe, who is given the task of saving the world (if it’s nothing else).

The game Fable appeared 1996 for the systems MS-DOS and Windows. A classic point and click adventure awaits you in this retro game. The developer of the game is Simbiosis Interactive . Sir-Tech in North America and Telstar Electronic Studios in Europe. The single-player game has nothing to do with the familiar RPG.

The people of Mecubarz once visited the people in a fantasy world. The Mecubarz wanted to create a civilization of beauty, wisdom and power. They had advanced technology, unlike the people who lived in the medieval world. People were obsessed with fear and greed. Led by Ishmael, a high priest of the Mecubarz cult, they tried to deceive the people and seize power. The astral beings revenged themselves terribly. They broke the world in four parts. The first part was covered by ice, the second wrapped in fog, the third submerged in water and the fourth devoured by the fire. The co-conspirators of Ishmael turned them into semi-divine beings who were forced to guard the keys to the power of the Mecubarz. The high priest was lost since then. One hundred years later, the village elder sends Quickthorpe to kill the four guards who retrieve stones and save the world. 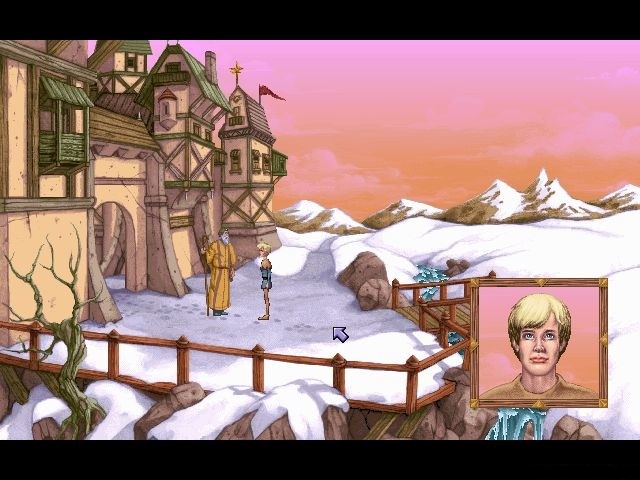 You take the role of Quickthorpe.Fable is a classic point and click adventure where you have to solve different quests. Collect information and what is not nailed on the grown. Are you going wrong, expect numerous deaths. If Quickshorpe dies, the game continues without him and you can not control anything and you have to see how things go on. If Quickthorpe is in the otherworld, you can still save. If Quickshorpe moves too fast or too slow, you can adjust the game speed as needed.

The game uses SVGA graphics. You need Direct X of the Windows95 version to play Fable. In- and Outro are shown with 3-D bovine sequences. Backgrounds, characters and objects are hand drawn. The characters are very nicely animated and the game is presented with great attention to detail. The places in the game are varied by the different elements. The game has no background music, but very nice sounds. The effects are brought across well and instead of the background music, there are various background sounds, such as the patter of a fire or the sound of a river. The synchronization is first class. Quickthorpe is spoken by Hans-Georg Panczak, who is the German dubbing voice of Luke Skywalker. There are very crude humor and different accents in the game.

As with other classic adventure games, the game is controlled with the mouse. The right mouse button initiates actions, such as viewing, speaking or taking. Use the left mouse button to give your hero the command to move around the screen or perform actions. The inventory can be opened by clicking on Quickthorpe or using the right mouse button. Unfortunately, a simple click is not enough for using items. First you have to select the action with a mouse click and take the item, for example, before you can use it. For important objects that Quickthorpe looks at, a small window opens up where you can examine or search items more closely. In addition, there is an overview map that you can find your way around. However, to move you have to go through each area anyway.

A hero against evil

Faible is an adventure that does not take itself very seriously. The atmosphere is very reminiscent of Simon the Sorcerer . There are regular references to our world. The protagonist is the young hero who sets out to destroy the evil and obtain the legendary artifacts because no one else feels like it. About the background of the story, you will always learn something piecemeal. 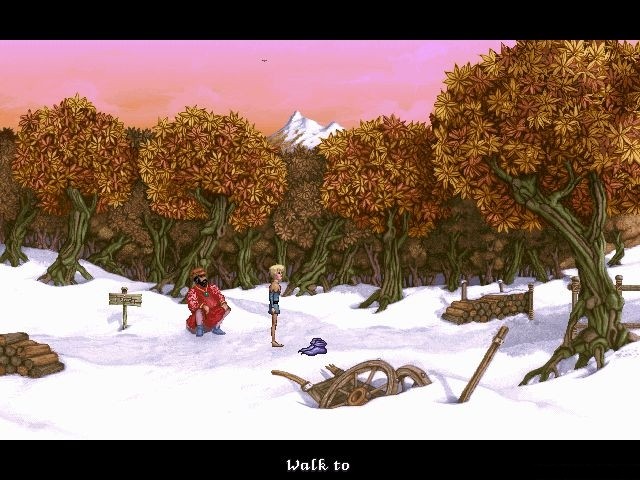 One third of the collected objects turn out to be completely useless and pure inventory fillers. This complicates some puzzles, as you will find the right items from the inventory. Hints for the puzzle solutions are often in discussions. The atmosphere is funny, with sometimes a bit stubborn humor. In addition to human figures, Quickthorpe encounters, for example, voodoo licks or the grim reaper.

Store your game definitely often. Do you want wrong answers in conversations or do things that other characters do not like to see you quickly find a premature end. Quickthorpe in his world has very many ways to die.

One problem with Faible is getting the game up and running. In order to play it, you are forced to use the DOS box. Unfortunately, it is a habit to hang up more often when you leave a screen. If you go over the option file of the DOS box and change the line cycles = auto to cycles fixed 8000, the speed of the DOS box changes. If it still hangs on, change the number again. At least 6000 cycles must be set. Unfortunately that worked for me and the game still hung too often. That’s why I sort it out at the corner of the lost games.

The end of the game

Fable has two different players. A variant appears only in the international publication, while the North American end is different. The European end, unlike the alternative, has a happy ending.

Anyone who still knows Simon the Sorcerer is in the right place for this game. The game is funny, varied and entertaining. Apart from the fact that the controls take some getting used to and you have many options to kill Quickthorpe to death, the game is highly recommended for adventure fans. The game would have given something more and does not bring much new on the plan. Nevertheless, it knows how to entertain.